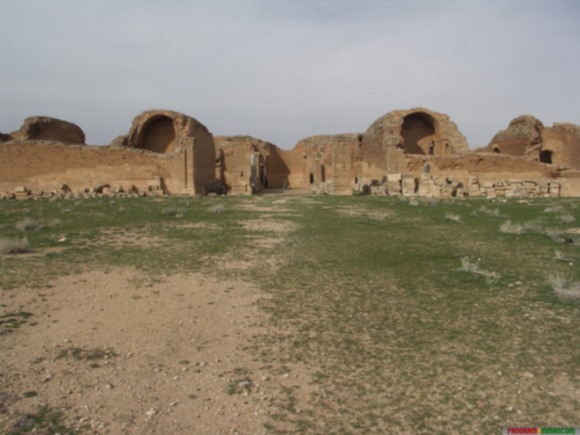 The most richly decorated of the Umayyad palaces in Jordan was Qasr al-Mushatta, near Queen ‘Alia International Airport just south of ‘Amman. Little remains of the delicate and vivid stone carvings that once adorned the façade – in 1903 the Ottoman Sultan Abdul Hamid 11 gave them to Kaiser Wilhelm II. They are now in Berlin.

Qasr al-Mushatta is a large square walled enclosure with round towers at the corners and five semi-circular ones at regular intervals on each side except the south, whose centre is occupied by the gateway. It was on either side of this gate that the magnificent 5-metre high carvings were originally situated in a band of upright and inverted triangles.

A complex of buildings just inside the gate led into a spacious central court, with the royal audience hall and residence at the far end, probably built for Caliph Walid TI, The audience hall is basilical as you enter from the court, with a trefoil apse which may have been covered by a wooden dome. On either side of it the buildings were covered with barrel vaults of baked mud bricks, some of which remain. Like Qasr at-Tuba, the palace was never completed.