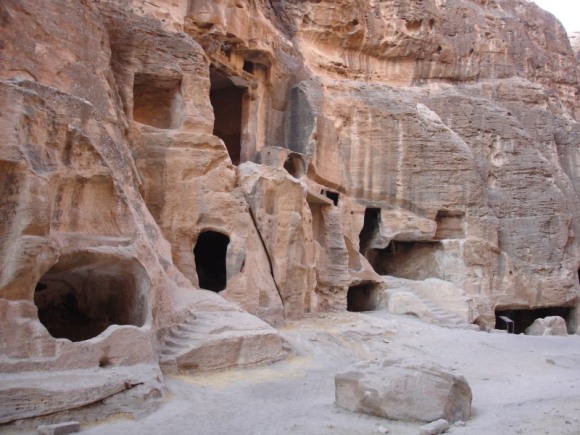 A short distance north of Petra lies an area of pale honey colored rock – Al Beidha in Arabic, ‘the white one’. Here in the 1st century AD the Nabataeans established a commercial suburb, a place for trading caravans to stop en route between south Arabia and the Mediterranean.

Al-Beidha’s fertile land had been exploited for many millennia before the Nabataeans, a Neolithic group settled here around 7000 BC, hunting animals with flint weapons and gathering wild plants to eat. They also grew wheat and barley and kept goats and sheep.

International trade is clear from Anatolian obsidian found here, turquoise from Sinai and pumice and shells from the Red Sea and the Mediterranean, doubtless exchanged for local red haematite, red and yellow ochres, green malachite, and shiny, translucent mica.

Eight building levels have been excavated, from groups of circular rooms with shared walls to rectangular houses. Though hearths were outside in courtyards, fires still occurred, followed by rebuilding. It is one of the best preserved of Neolithic settlements, for it was never built on again after its abandonment some 500 years after it was settled. The only damage came 6,000 years later, when the Nabataeans terraced these fields for farming.

Today Al-Beidha is part of the territory of the Amareen bedouin, who farm the land and use the Nabataeans rock-cut cisterns.