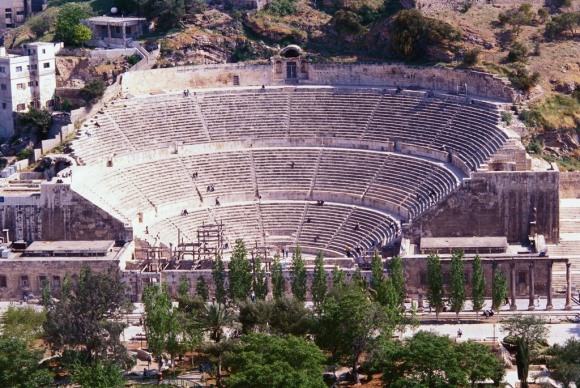 The most imposing monument of Roman Philadelphia, and the best preserved, is the theatre – according to an inscription it was built in the reign of Antoninus Pius (AD 13 8-61) to hold 6,000 people. The theatre and odeon (which held c. 500) were on two sides of a colonnaded forum, dated I 89, of which only part remains. These originally stood beside a stream and a major road, the Decumanus Maximus – the stream is now in an underground culvert and the road has long since been built over. The propylaeum (a triple-arched gate that once stood north of the forum, beyond the stream and road) has also disappeared; it was the entrance to the processional stairway up to the citadel and was mentioned by travelers as late as 1911.

Jabal Jofeh, the hill into which the theatre is built, became the main residential area for the affluent in the early years of the Emirate of Transjordan, in the 1920s and early 30s; but that role soon transferred to Jabal ‘Amman and is now held by the area of Abdoun, further to the west.

In 1948 the theatre and ancient tombs along the hillside here provided a first safe haven for some 50,000 Palestinian refugees fleeing their homes in what became Israel. Within two weeks ‘Amman’s population nearly doubled, Many remained, as citizens of Jordan, and were enabled gradually to replace their tents with the more permanent structures that today stack almost one on top of another on the steep slopes.