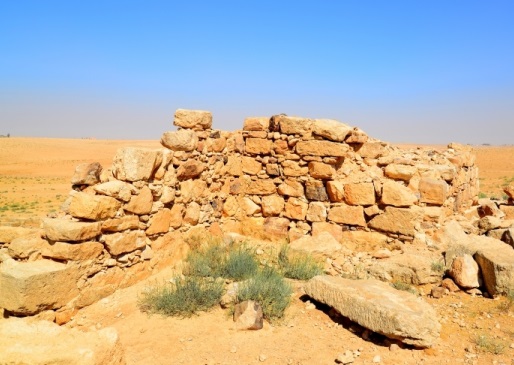 Umm ar-Rasas lies in open rolling countryside just east of Dhiban. First mentioned in the Bible as Mephaath (Josh. 13: I 8),. It was later one of the many Moabite towns that Jeremiah prophesied against (Jer. 48:21).

In Roman times it was Castron Mefaath, or Mefa’a, and indeed the main ruins are a Roman fort the size of a small town (158 x I 39m), where a Roman garrison was based. But time and earthquakes have reduced it to a chaos of fallen stones, with some arches rising above the rubble.

Four churches have been identified inside the walls, two of which have been excavated, both 6th century. Outside the northern walls the excavation of several more churches has revealed some magnificent mosaic floors of the late-6th to 8th centuries. Most spectacular is that in St Stephen’s Church (laid in 719; the apse in 756), which includes representations of cities in Palestine, Jordan and Egypt – with no false modesty, ‘Kastron Mefaa’ and Jerusalem occupy the two positions of honour in the design. Clearly Christian life continued uninterrupted after the 636 Islamic conquest, with large churches being built and lavishly adorned.

Two kilometers north of the fort stands a tall tower, with a cross carved on three sides and a single chamber at the top. It is thought to have been a stylite’s pillar of the 6th century. Near it are a small church, a three-storey building and rock-cut cisterns.