Another Archaeological Mystery unfolds in Jordan 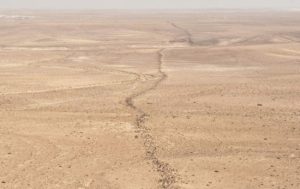 Archaeological Aerial Photography has recently revealed a puzzling ancient wall that runs 150 KM north-northeast to south southwest across the country.

Though any one of the many kingdoms or empires that ruled Jordan in that long stretch of time could have built the wall, the structure might not have been constructed by a large state. It is possible that local communities, seeing what neighbours have done and persuaded of its usefulness, simply copied the practice.

But in truth archaeologists cannot agree on who really built the wall, when or for what purpose, as they dig deeper the purpose of the wall becomes even more bewildering; it is low in height and narrow, so how can it be explained as a defensive barrier?

And to add to the mystery there are about 100 towers spread along the wall. Were they watchtowers, or simply higher places to better hunt from? Maybe points of refuge for travellers…

The more extensive research becomes, the more it leaves archaeologists with even longer series of questions and mysteries.

These constantly emerging wonders are not strange to Jordan, as it is the land where you are always walking in the footsteps of many civilizations.