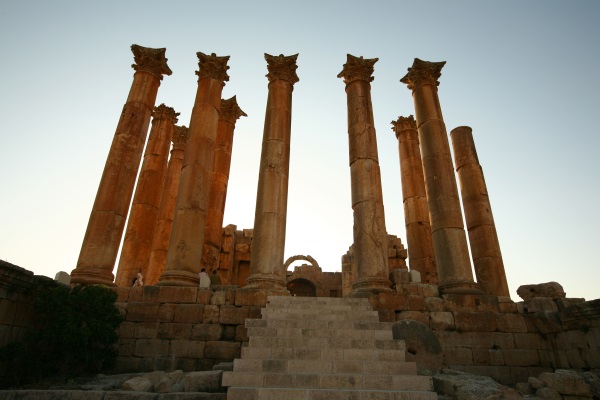 One of the best-preserved provincial Roman towns in the world, Jerash lies about 45 km north of ‘Amman, in a fertile valley with a perennial stream. Because of its water, the site has been settled at least since Neolithic times and Bronze and Iron Age pottery has been found on the original tell. Its early Semitic name was Garshu.

Tradition claims that it was re-founded by Alexander the Great (or perhaps his general Perdiccas) to settle Macedonian veterans; but the Seleucid king Antiochus IV (175- 164 c) is more likely. Renamed Antioch ad Chrysorhoas (Antioch on the Golden River, as the stream was rather grandiosely called), little remains of this Hellenistic era, nor of the brief Hasmonaean occupation, for the new Roman city of Gerasa obliterated most of what preceded it. As a city of the Decapolis, Gerasa entered a long period of prosperity.

In the 1st century AD a new town plan was adopted with a colonnaded main street, the Cardo, at the south end of which is the unusual and lovely Oval Piazza (in fact two unequal parabolas joined by a straight line). Above it is the larger of the two theatres, with seats for about 3,000 people.

Between them is the temple of Zeus, its Hellenistic version on the lower terrace, and its latest 2nd-century AD remodeling on the hill above. Also in the 2nd century the Cardo was made wider and grander, with Corinthian capitals crowning its columns – the old Ionic ones were reused in various parts of the city. Two cross-streets were made, the North and South Decumanus. West of the Cardo rose a handsome octagonal macellum, or food market; and also, just south of the North Decumanus, a second smaller theatre, or odeon. Two large bath houses were added further east, near the residential areas.

Dominating Jerash still is the great temple of Artemis, built and enlarged (but never completed) between the late 1st and mid-2nd centuries, and dedicated to the city’s patron goddess. It is set in a wide and spacious temenos, approached from the Cardo through a monumental gate and stairway.

In the Byzantine period many churches were built, mainly reusing Roman building material, but Gerasa’s heyday was already past when the Persians invaded in 614, After the Arab conquest of 636 the city was an Umayyad regional centre, important enough to mint coins under Caliph Abd al-Malik bin Marwan (685705) and graced with a fine Friday Mosque. But after the 749 earthquake and the removal of the Caliphate to Baghdad, the city faded into ruinous obscurity.

In 1806 a young German scholar, Ulrich Seetzen, identified the ruins as Gerasa, and he was soon followed by an increasing stream of western travelers. In 1878 the Ottomans allowed a group of Circassians to settle here; and their village grew into the modern town on the other side of the valley.