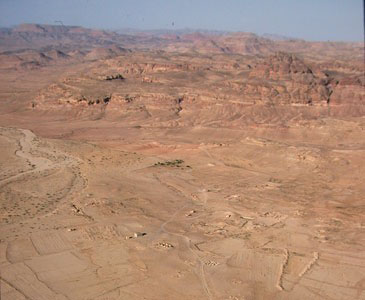 According to the Byzantine writer Uranios, the earliest town on this site was built in obedience to an oracle consulted by King Obodas I (c. 96-86 Bc). But it was Obodas’ son, Aretas III, who founded the town, at a time when the Nabataeans were defining their territory, and a more settled population was desirable. Uranios called it Auara (Arabic: huwara, white); today it is al-Humayma, lying in Wadi Hisma in southern Jordan.

White Auara clearly filled a provisioning and security gap in the trade route south of Petra, a major drawback was its total lack of water. But if a settlement was needed at just that point, the Nabataean attitude was that water could be caught or brought. Numerous reservoirs were dug to catch run-off water during winter rains, and 27km of covered aqueducts channeled water from springs in the Shara Mountains just to the north. This water supply may have encouraged local bedouin to come here for trade, and to settle for a while each year to grow crops which helped provision the trading caravans.

The Roman expansion of al-Humayma included a large rectangular fort, in AD 400 the base of locally recruited Native Horse Archers. In the early 8th century the town was the home of the Abbasid family, who built a handsome palace here. It was at al-Humayma that they plotted their rebellion against the Umayyad caliphs, ousting them in 750.