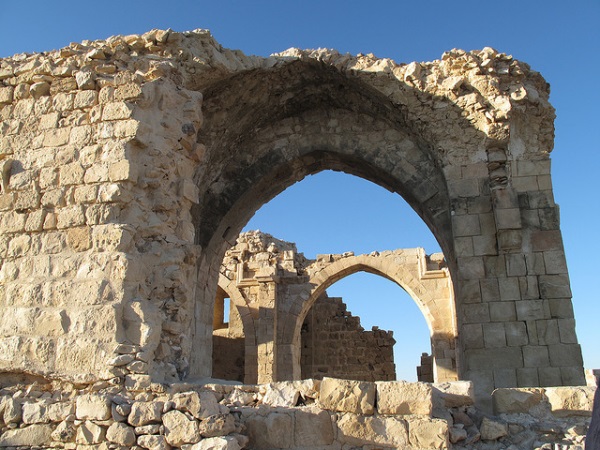 About 25km north of Petra an imposing castle crowns a cone of rock which rises 3bove a wild and rugged landscape. It is today named after the nearby village of Shobak; but to the Crusaders it was Crak de Montréal – the fortress of the royal mount. It was built in 1115, in the reign of Baldwin I of Jerusalem, the first of several castles designed to protect the new province of Oultrejourdain from its Muslim enemies, who attacked from the route linking Syria and Egypt — the old King’s Highway.

Montréal was the base of Roman du Puy, first lord of Oultrejourdain, but in 1132 the tide was given to Payan Ic Bouteiller, who moved to Karak ten years later. Montreal remained an important Crusader defence – it was besieged by Saladin in 1171, and again after the Crusaders’ defeat at Hattin in 1187. It held out a few months longer than Karak, finally capitulating in the spring of 1189.

The Ayyubids held the castle until 1260 when the new Mamluk SuLtan in Egypt, Baybars, secured the whole region under his rule. Apart from a Crusader church and chapel, and an Ayyubid palace, most of what we see today dates from a late 13th-century Mamluk restoration, including a handsome frieze of Arabic calligraphy around the outside walls. Ottoman rule lapsed into control by sheikhs of the area until the late 19th century; and the castle was inhabited by a few local families until the 1950s