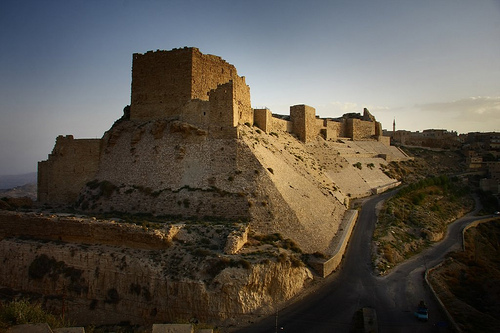 This splendid Crusader fortress – Crak des Moabites, or Le Pierre du Desert to the Crusaders – soars above the wadi is and hills like a great ship riding waves of rock. It is strategically situated in the midst of rich agricultural land, on the ancient crossroads between the north-south trade route of the King’s Highway, and the east-west route that climbs Wadi Karak from the Dead Sea and runs to the edge of the eastern desert. Karak’s origins go back at least to the Late Bronze Age. In the Iron Age, as Kir-haraseth, it was a major town of Moab under King Mesha (c. 85 3-830 BC). Later it also figured in Isaiah’s prophecies, in which he rather oddly mixed messages of doom with mention of what may have been a local delicacy, now unknown – ‘Let everyone wail for Moab. Mourn, utterly stricken, for the raisin-cakes of Kir-hareseth’ (Is. 16:7). Carvings, column drums and inscriptions indicate that this was a significant town in Nabataean, Roman and Byzantine times – it minted its own coins in the 3rd century, and appears prominently in the Madaba mosaic map as Characmoba. But these earlier towns were obliterated by the new Crusader castle.

The Crusader province east of the Jordan rift, Oultrejourdain, was at first based at Montréal (Shobak). But in 1142 the lord of the province, Payan le Bouteiller, judging Karak’s position more strategic, began work on this new castle. It was completed by the de Milly family, lords of the province after 1161, who lived here in a more grandiose style than that of any western king.

In 1177 Etiennette de Milly, heiress of Oultrejourdain, took as her third husband Renaud de Chtillon, one of the most ruthless and duplicitous of all the Crusaders. After Renaud’s repeated attacks on Muslim pilgrimage caravans and ships in 1181 and 1182, in defiance of a truce, the Ayyubid leader Saladin vowed revenge. His siege of Karak in II 83 coincided with the marriage of Etiennette’s son, Humfried von Toron, to Princess Isabella of Jerusalem. Etiennette diplomatically sent wedding food to Saladin, who then asked which tower housed the bridal pair and ordered his siege engines to cease bombarding it. In the end he had to raise the siege, as he did again the next year.

After the defeat of the Crusaders at the battle of Hattin in 1187, such was Saladin’s fury with Renaud (who had continued his brutal raids on pilgrims) that he personally beheaded him. In 1188, after a siege of over a year, Karak finally surrendered to Saladin’s army – the alternative was starvation.

Karak remained in Ayyubid hands until the Mamluk Sultan Baybars took it in 1264. He and his heirs rebuilt much of the castle, which in 1326 impressed the Arab traveller Ibn Battuta – he said it was called ‘the Castle of the Raven’. In Ottoman times Karak was ruled by local families. It became a British administrative centre after World War I until the Emirate of Transjordan was founded in 1921. It remains the centre of a large district.