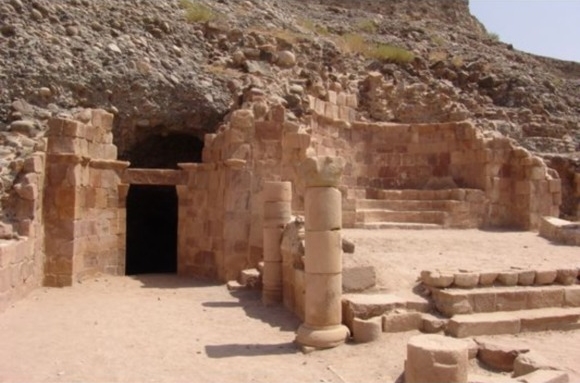 In the hills east of Ghor as-Safi (ancient Zoar) a cave was found in 1991 with Early and Middle Bronze Age pottery inside. Speculation linked the finds with Abraham’s nephew Lot who, according to the Bible, moved to a cave in the hills above Zoar after the destruction of Sodom and Gomorrah.

In the Bible (Gen. 19:30-38), Lot’s two daughters, afraid of being the last people left on earth, plied their father with wine and slept with him in turn. The elder daughter bore a son named Moab, ancestor of the Moabites, while the younger daughter’s son, Ben-ammi, was the father of the Ammonites. The story smacks of the kind of propaganda any tribe might put out to discredit its enemies -tales told by the Moabites and Ammonites against the Israelites do not survive.

The area has long been associated with Lot- the 6th-century Madaba map shows a church of St Lot in just this location. And excavations here in the 1990s revealed a 7th-century Byzantine church with a dedication to ‘St Lot’, and with access to the cave through the north apse. Its floors were covered with six mosaic pavements, one dated 572, another April 605, a third May 691. The size of the church, its associated hostel, and inscriptions invoking the name of Lot, all point to this being a place of pilgrimage. It continued to be so for than a century after the Islamic conquest.