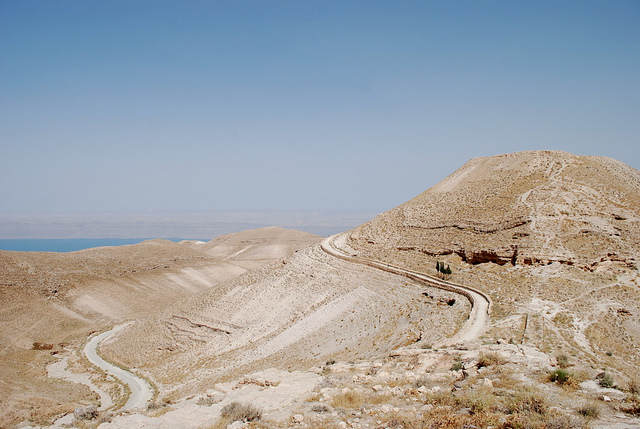 The local name for this hilltop al-mishnaqa, the gallows carries resonances of its early notoriety, for the fort that crowns it is traditionally associated with the imprisonment and execution of John the Baptist. Dramatically situated in the hills south-west of Madaba, and overlooking the Dead Sea, the fortress of Machaerus lies near the small village of Mukawir, whose name reflects the ancient one. But the story of Machaerus is older than that of John the Baptist.

An earlier fortress was built here by the Hasmonaean ruler Alexander Jannaeus (103-76 BC) to defend his eastern territory of Peraea against the expansionist Nabataeans. So impregnable was it thought to be that Jannaeus’ widow and heir, Alexandra, stored her treasure here, But the site proved not to be inviolable — in 57 Bc, ten years after Alexandra’s death, when the region had descended into civil war between her two sons, the Romans asserted control and seized this strategic fortress, virtually demolishing it in the process.

To seal the fate of the Hasmonaean dynasty, in 37 BC the Roman senate proclaimed Herod (later called ‘the Great’) king over the people and lands of his Hasmonaean predecessors. Machaerus was rebuilt by Herod both as a palatial and secure summer residence and also as a defense against the neighboring Nabataeans. According to the contemporary historian Josephus, Herod ‘built a wall round the very summit and erected towers at the corners, each 90 feet high. In the middle of this enclosure he built a palace, breathtaking in size and beauty’.

On Herod’s death, when his kingdom was divided between his three surviving sons, this area fell to Herod Antipas. Some 30 years later Antipas divorced his wife (a Nabataean princess, daughter of Aretas IV) to marry Herodias, wife of his brother Philip. His rejected wife made her way to Machaerus, then across the nearby border with Nabataea and from there, under the protection of the Nabataean army, she went south to her father’s capital at Petra.

John the Baptist, who had so outspokenly condemned Antipas’ divorce and remarriage, also came to Machaerus – but as a prisoner. Josephus tells us that it was here that Herodias’ daughter Salome danced and, at the instigation of her mother, demanded the Baptist’s head on a charger.

When Herod Antipas died, his lands were taken by the Romans who installed a contingent of soldiers at Machaerus. But in AD 66, in the early stages of the first Jewish Revolt against Roman rule, a group of rebels seized the fortress from its Roman garrison. Their respite was brief – soon after the fall of Jerusalem in AD 70, the governor of Judaea, Lucilius Bassus, led an assault against the castle and destroyed it. The forts which the Romans built for the siege, and the ramp they made for the final assault, can still be seen on the ridge below. But the ramp was never used as the defenders surrendered.