Today nine cultural antiquities which had been trafficked out of the country were triumphantly returned to Jordan as part of the bilateral agreement between the U.S and Jordan to preserve the latter’s rich cultural heritage.

The artefacts were handed over to the Department of Antiquities on Tuesday in a ceremony. The returned antiquities include Neolithic stone animal figurines, a Chalcolithic stone altar, tombstones, a human figurine, and a bronze pitcher.
The artefacts had been smuggled out of Jordan before being appropriated by a collector in New York.

US Ambassador to Jordan Henry T. Wooster was thoroughly pleased with the recovery of the artefacts he described as “priceless” since they are the first Jordanian collection of antiquities to be recovered. 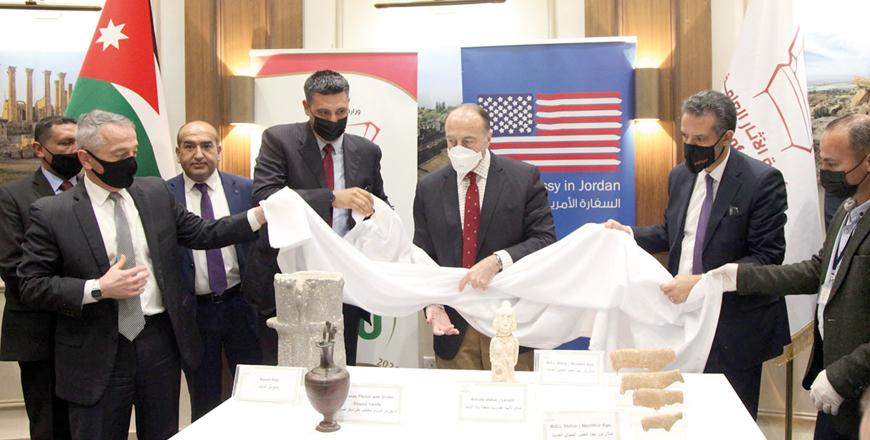 Part of a long-awaited trend

This is not the first time major artefacts have been returned to Jordan. In 2019, largely thanks to the expertise of an Oxford archaeology expert, three finely carved stones that formed part of the Nabatean temple complex of Khirbet et-Tannur were returned.

Khirbet et-Tannur was an important pilgrimage destination for the Nabateans from the 2nd Century BC to the 4th Century AD in which they gathered to celebrate seasonal rituals and banquets. Seventy kilometres from Petra, it is reached by a 30-minute trek up Jabal et-Tannur. The summit is well worth the climb despite there being only the foundation walls and some architectural details still visible.

Thanks to the tremendous expertise of Dr Judith McKenzie of Oxford University, the pieces were reunited with the others in Jordan. Dr McKenzie led international studies of the excavation records of the temple and authored two books on the topic of Nabatean architecture and the temple at Khirbet Et-Tannur. While preparing her doctoral thesis on the Nabateans, she lived in the caves of Petra. She believed that it was of utmost importance the pieces be returned to Jordan.

Dr McKenzie became aware of the pieces after being contacted by a private art dealer in Spain who wanted to verify their provenance. The pieces had been acquired by Juan Durán-Lóriga, the Spanish ambassador to Amman in 1969, and formed part of his estate after his death. The last known location of the stones was first in Jerusalem and then later in Amman after the establishment of the museum. The items weren’t listed on any art loss register. Despite thorough research, it is unclear whether the stones were gifted or sold to Mr Durán-Lóriga.

Due to the fact the renowned Nabatean traders picked up varying architectural styles, their rock-cut tombs and temples are notoriously tricky to date.

The temple at Khirbet et-Tannur was excavated in 1937 by Norman Glueck, an eminent scholar and renowned archaeologist whose discoveries contributed a great deal to verifying the biblical record. After the excavation was completed, the temple carvings were divided between Jordan and the Cincinnati Art Museum in Nelson Glueck’s home town.

The pieces can be seen in the Jordan Museum as part of the Vegetation Goddess panel and the Fish Goddess bust. You can also see the Ayn al-Ghazal sculptures which at over 9000 years old are some of the oldest known depictions of the human form.