February 22, 2022
An exciting find has been uncovered by a team of French and Jordanian archaeologists in the eastern desert of Jordan.

The 9,000-year-old shrine is part of a Neolithic campsite flanked by large structures known as ‘desert kites’ that were used to corral wild gazelles for slaughter. Desert kites are found throughout the deserts of the Middle East and consist of at least two long stones walls that narrow into an enclosure.

A find like this is unique for two reasons: firstly, the site is well preserved as almost everything was intact. Secondly, two large upright carved stones with anthropomorphic features were found. Additionally, an altar, hearth, marine shells, and a miniature model of the gazelle trap were discovered.

The researchers said in a statement that the shrine “sheds an entire new light on the symbolism, artistic expression as well as the spiritual culture of these hitherto unknown Neolithic populations.”

The juxtaposition of the site to the traps implies the inhabitants were specialized hunters and that the traps were “The centre of their cultural, economic and even symbolic life in this marginal zone,” the statement said. 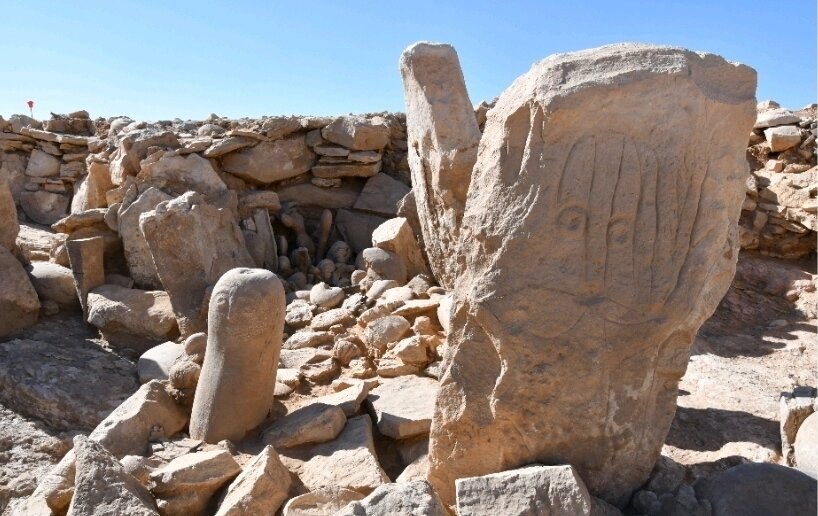 Excavations in the village of Shobak, of which Shobak Castle is named, has uncovered evidence of Jordan megaliths dating over 5000 years ago.

A team from Jagiellonian University in Poland, who were studying dolmen in the area, found traces of pottery vessels, flint tools, and bone fragments. Dolmen, which can be found worldwide, consist of tomb-like structures configured from two or more megaliths placed vertically in the ground, topped by a large flat horizontal capstone or “table”. The largest is estimated to weigh several dozen tonnes.

The archaeologists were surprised to find several unfinished dolmens that were abandoned at different stages of construction, enabling the team to infer how they were fabricated.
Dr Piotr Kołodziejczyk said: “Thanks to primitive tools probably made of wood and simple techniques involving carving off stone blocks from the ground, lifting them and then supporting them with smaller ones, it was possible to erect these fascinating structures rather quickly. We now need to calculate their weight in order to figure out how many builders it took.

The team’s finding of a wall encasing the dolmens, in addition to a well close by, prompted them to conclude that the dolmens may have not only served as burial sites but also places of ritualistic worship as well as landmarks.

A grave was discovered in one of the dolmens alongside what looked like personal items. The team are hoping lab tests will enable them to determine the time of burial, sex, health, and ethnicity of the remains. They hope ‘’The discovery will bring us closer to solving the mystery of the Jordanian megaliths” added Kołodziejczyk. 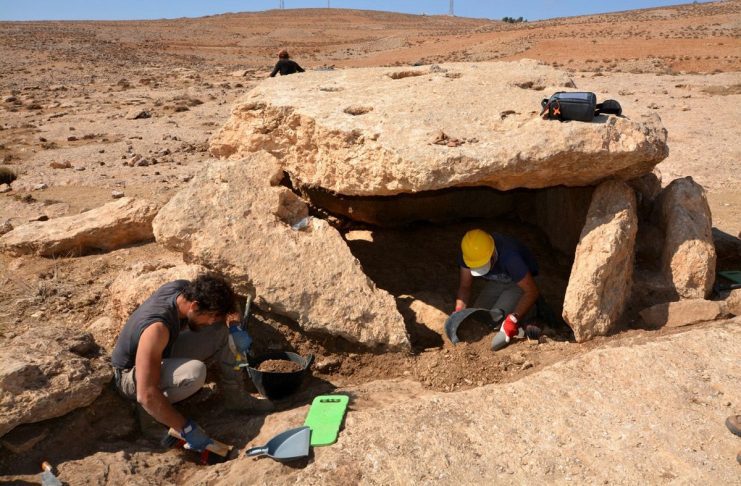 Shocked excavators working on the installation of a new water drainage system uncovered evidence of Roman baths and a crematorium in the downtown area of Amman.

The Jordanian Antiquities Department gained control and discovered Roman baths with heated cellars and a crematorium, in addition to pottery pieces and two headless statues. The traditional mosaic shower rooms remain so far undiscovered. The new discovery dates back to the Roman period in the second century AD when Amman was named Philadelphia.

The discovered site is believed to have been located on the historic Amman River, an extension of the Roman road. The river was completely covered during the 1960s. The newly discovered Roman baths form part of the ancient Roman city, which includes a temple, the Roman Amphitheatre and the Nymphaeum.

Amman consists of nine ancient cities built on top of each other — the first during the Stone Age; the others were built by the Assyrians, Babylonians, Ammonites, Moabites, Romans, Byzantines, Greeks and Islamists. Ruins exist from the Bronze Age also. The city was renamed in the Roman period after Ptolemy Philadelphus who occupied the city at the end of the third century BC. The Romans rebuilt the city, inaugurated the Roman Amphitheater, added their mark to the Citadel, and paved the streets flanked by columns.

It is estimated that up to 100,000 archaeological sites exist in Jordan alone, although only 0.02% of them have been recorded.