In visiting Jordan, many travellers assume that the Kingdom’s attractions exist solely on a North-South axis. From Umm Qais and Jerash in the North to Petra, Wadi Rum and Aqaba in the South; many of Jordan’s incredible sights can be witnessed by detours off a couple of arterial highways. Thus, Jordan’s eastern desert and the historical sights therein are often neglected.

This is a shame. The region is home to the desert castle loop, an increasingly popular trip from Amman taking in a range of ancient desert retreats, forts, and caravanserais. 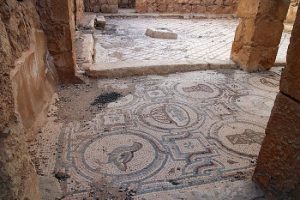 An hour from central Amman, the first stop on this desert jaunt is to Qasr al-Hallabat, an abandoned Umayyad complex that once hosted a mosque, advanced water system and bathhouse. Originally a Roman fort, the site was abandoned in 749AD. However, the impressive mosaic floors and Greek inscribed walls remain. Tourist infrastructure here is limited, but a small visitor centre paid for by the Spanish Archaeological Mission acts as the point of entry to the site.

Hypothetically, the entry fee is included in the Jordan Pass or 3JD for all other foreigners. However, upon visiting in late 2021, the Bedouin men at the entrance seemed apathetic to enforcing any kind of entry regime, instead opting to sip tea whilst small groups of tourists meandered around the ruins. A quiet stop on the eastern desert loop, it’s worth spending 20-30 minutes at Qasr al-Hallabat. A couple of kilometres down the road lies Hammam as Sarah, a tiny but nonetheless interesting abandoned Ummayad spa. This easy to miss complex is composed of a bath-house and hydraulic system with adjacent ruins of a walled garden and well. This is worth a very short visit, perhaps around 10-15 minutes. 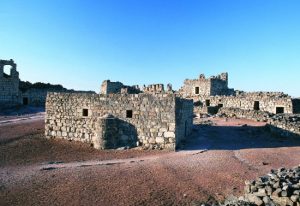 The next stop on the desert castles loop is Azraq castle, approximately fifty minutes from Hamman as Sarah. This imposing basalt-built structure has a fascinating history. Strategically located in the heart of Azraq Oasis it has been in almost continuous use since its construction as a fort by the Romans in the 3rd century AD. From then on it has served as an Ummayad hunting resort before returning once more to its intended purpose as a fort under the Abbuyids and Ottomans. More recently, however, the castle hosted T.E. Lawrence (Lawrence of Arabia) and his Arab counterparts whilst they prepared for their military offensive against the Turks in 1918. Azraq castle is intact, but as is the custom in Jordan, explanatory signage is lacking. Unlike Qasr al-Hallabat, the men at the entrance did want to charge for entry. This was 3JD for foreigners or included in the Jordan Pass. Although on our visit we didn’t explore Azraq itself, there are good options for food in the town. 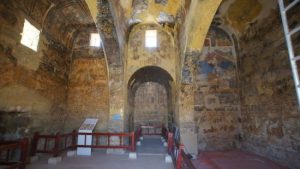 25 kilometres from Azraq castle, the road leads to Qusayr Amra, Jordan’s best-known desert castle. A UNESCO World Heritage Site, it was built by the Umayyads in the 7th century as part of a larger complex intended as a luxury royal retreat. What remains is a small lodge, notable for its frescos which represent some of the best examples of early Islamic art in existence. Qusayr Amra is a real highlight of the desert castle loop. A tent by the entrance serves drinks to tourists and entry is 3JD or included in the Jordan Pass. 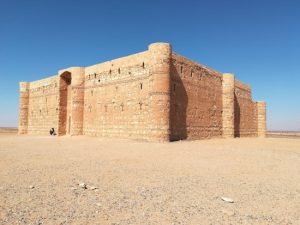 15 kilometres after Qusayr Amra lies Qasr Al-Kharranah, the most imposing of the desert castles. Originally built in the early 7th century, its original purpose is unclear. Ideas floated include functions such as a caravanserai, a meeting place for local Bedouins or a fort. Nevertheless, it’s an impressive structure which is matched by the skills of persuasion boasted by the local Bedouins who are ever keen to offer their services as guides. We encountered Mubarak, a towering individual not exceeding 4’11” (1.5metres), who for the modest fee of three dinars barked facts about the castle at our group. Qasr Al-Kharranah is a must-see stop on the desert castles loop. Entry is 3JD or free with the Jordan Pass. 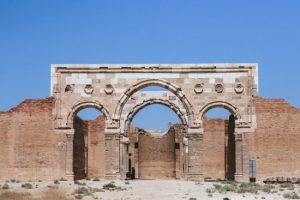 Whilst we returned to Amman after Qasr Al-Kharranah, there are further stops available. For those with an interest in both aviation and history, Qasr al-Mushatta is an impressive eight-century palace complex on the perimeter of Queen Alia International Airport. Moreover, Qasr Burqu’ in Jordan’s far east near the Iraqi border is a great place to camp with an adjacent Roman reservoir attracting migratory birds in the Autumn and Spring.

Whilst it is fairly simple to self-drive the desert castles, we recommend taking a tour. This offers numerous advantages. Firstly, whilst driving in Jordan is usually unproblematic, hiring a driver eliminates the stress of dodging the ruthless truckers who frequent the desert roads.  Signage is highly limited at each stop, and our guides enable clients to get the most out of each location, revealing the true history from details that are often overlooked. We have years of experience creating exceptional experiences in Jordan. To get the most out of your time in Jordan’s undiscovered Eastern desert, feel free to get in touch with us.